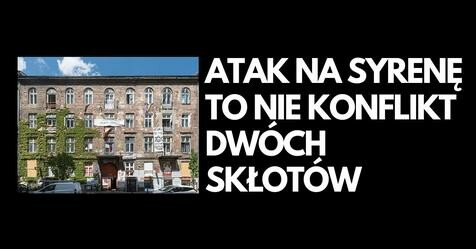 IP (Inicjatywa Pracownicza, Workers’ Initiative) hand in hand with Agrounia (Agro-Union), Przychodnia squat giving place for party agitation. If you don’t believe it, check out their fanpage. They don’t hide it. On the contrary, they are proud to fight the system in alliance with the beneficiaries of that very same system. A few years ago already, IP (WI) had a romance with social democrats from the Razem (Together) Party. Some unionists, having private life relations with politicians from the party Razem (Together), repeat the pattern in their public activity. Now they make bonds with landowners from the Agro-Union. Who cares, that its leader Michał Kołodziejczyk shoots selfies with the biggest nazi fish Robert Bąkiewicz (head of Independence March, leading dozens of thousands nazis through the capital on every 11.11) or with fascists from the far-right party Konfederacja (Confederation)? What counts is that Agro-Union is ‘on our, left side’. He is now a ‘leftist’ for our measures!

Does IP (WI) manipulate Agro-Union or Agro-Union manipulates IP (WI)? Doesn’t matter. A trade union calling itself an anarcho-syndicalist one invites to the demos a dude, who donated to the nazi Independence March and stood beside its leader Robert Bąkiewicz not so long ago. IP (WI) unionists speak at the founding assembly of the Agro-Union. It makes no difference, what are their motives. IP (WI) legitimises so a political party consisting of, among others, climate catastrophe denialists and fur farm owners. All their ideas do not have much in common with Left and even less with anarchism. Ikonowicz’s and Śpiewak’s sympathy for Agro-Union as a ‘representation’ of the peasant people is no surprise, the stance of IP (WI) is a surprise. What such a strange alliance is supposed to bring? So far, no answer.

This undermines trust to IP (WI) as an anarchist trade union. Were it not enough, ties between IP (WI) and the party Razem (Together) remain strong for years. Union representatives speak at the parliament besides MP Maciej Konieczny. He is being hosted at the ‘anarchist’ squat Przychodnia. The abusive collective from the Skorupki street is proud of relations with an MP and a common photo at the event organised for the migrants. Yet he is the author of the word cited below:

‘I have no doubt: it is crucial to cooperate as closely as possible with our partners, primarily from the European Union, but also from NATO’.

It’s not the only success of the Przychodnia collective. Day after legitimisation of landowners and animal murderers by the IP (WI), their friends from the Przychodnia squat decided to attack the neighbouring squat Syrena. The reason for the aggression of the quasi-anarchists was to defend an abuser, who was terrorising the neighbouring collective for a few months. People living there were being attacked and threatened by him. Lived in constant fear. Attempts for mediation didn’t help. He didn’t want to change behaviour nor leave the squat. It ended up in a tragedy. Syrena collective members were kicked out from the building at Wilcza st., 30 by the dumbs of Przychodnia. After such a successful attack on queer persons and feminist activists, they reclaimed the place for ‘true squatters’. The survivors were left with no home nor possibility to take their things, documents or medicines. That was the beginning.

The perpetrators used social media to defame Syrena collective members. They stood for the abuser, presenting him as ‘political refugee’ and ‘leader of Belarusian anarchists’. As it turned out, he wasn’t any ‘political refugee’ nor ‘leader’. Nor was he known to any broader circles of anarchists from Belarus staying in Poland.

We know, however, who he is. A friend of two abusive persons, today members of the Rozbrat squat collective and IP (WI) activists. They lived at Syrena a while ago. Pro-tenants activists, who treated the building as their property and decided, who can and who can not belong to the collective. Though, themselves, they were breaking the rules, that were binding for others. When the collective tried to make them follow these rules, they stopped appearing at the broader collective assemblies and home meetings. In the end, they moved out. Which doesn’t mean that they abandoned the place. Thinking of it as their property, they attempted to influence it via different means. A few members of the collective, who were in good terms with them, were sabotaging the collective works. They also moved out, but two stayed. One was exactly the abovementioned violent abuser. The rest of the story you already know.

Let it be the closing point. Precisely that one Rozbrat squat and Inicjatywa Pracownicza (Workers’ Initiative) activist stood at the union demo besides Michał Kołodziejczyk (who holds a black-red flag), an ally of the nazi leader Bąkiewicz. That was for the weekend of pato-left and pato-squats: Rozbrat and Przychodnia.