This is a text from anarcha-queer activists in Berlin and a solidarity photo shot in Köpi – one of the oldest squats / anarchist social centers in Berlin. Thanks for the words of support and pointing out the authoritarian and anti-feminist turn within the anarchist movement, that is a key element of the attack against Syrena. Originally published on de.indymedia.org 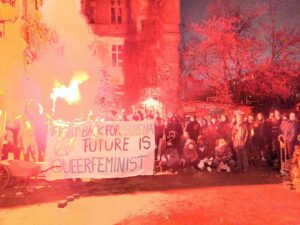 Dismantel the structures of power and patriarchy in the anarchist movement, everywhere.
With great anger we receive the news of the attack of Dec. 5 from Warsaw.
The attack and eviction of the Syrena collective by the neighboring Squat Przychodnia is a breach of trust that is felt far beyond the borders of Poland.
Meanwhile, there are many detailed explanations on the Internet about the course of this conflict. You don’t need to know every little detail to understand that this is a structural conflict: it’s about changing power structures in favor of queerfeminist positions within the anarchist scene. The privileged patriarchal dominators strike with full force to keep the old relations alive.
Therefore, it is not too surprising that one of the oldest squats in Poznan called “Rozbrat” argues straight patriarchal with their statement: they claim that some facts have to be clarified first. They say that the collective Stop Bzdurom (Stop Bullshit) is trying to dominate other groups in the house. From this can be read the fear of queerfeminist positions rising up. Their own patriarchal dominance is to remain untouched. Rozbrat announces the exceedingly questionable demand that “everyone else” stop fueling the conflict.
This call for non-interference sounds like a threat from this internationally known and recognized “anarchist” squat. It undermines the relevance of this conflict. It creates an image that only selected collectives and individuals would be able to judge the political implications. Furthermore, the structural patriarchal violence of this conflict is negated and relativized by arguments that it is about personal antipathies. Et voliá – there is a classic mechanism of legitimizing patriarchal violence. This approach is a process of silencing that must not be accommodated.
Those who want to speak, raise your voices!
However on one point we do agree: the attack on Syrena leads to a weakening of the anarchist movement. This is not because a violent person was expelled from the house or because the residents of Syrena defended themselves against their attackers. The reason for this lies in those violent and unprocessed patriarchal behaviors and argumentations, boundery crossings, muzzling and exclusion of marginalized people. And this affects the anarchist movement internationally.
The lines of argumentation in Rozbrat’s statement are symbolic of unprocessed patriarchal patterns and behaviors. These are part of an environment and a support structure that make it possible for such violent transgressions as the attack and eviction of the Syrena collective to take place.
Structural racism and structural patriarchal relations make the anarchist movement a space in which only the strongest and most enduring can operate. And “enduring,” means rather enduring these shitty conditions. This leads to these moments in which the existing has to collapse, so that something new can grow out of it – something that is truly radical.
The people who are marginalized within mainstream society experience similar discrimination in so-called anarchist spaces: LGBTQIA*, cis-Women, people without the necessary financial means, Disabled People, Black, Indigenous, People of Color, people with a history of flight, psychologically burdened people, and many more. It is time for us to take those spaces that are denied to us by structural dominance and the violence that results.
There is no such thing as powerless space. Calling a collective or a space as “anarchist” is insufficient if there is no apparent willingness to make one’s privileges and dominances transparent as well as discussable and to shift them in favor of marginalized positions within the movement. The anarchist idea is a deeply queerfeminist, anti-racist, as well as intersectional idea.
The first resistance is to revolt against ourselves. Against our learned patterns of thinking. But the question is, are we able to do that? Are we brave enough?
We demand the immediate return of the house to the Syrena collective, the departure of D. from the house of the Syrena collective as well as an emotional, political, as well as factual reparation of the damage done to the Syrena collective.
We demand a continuous critical confrontation with power structures in our own ranks, which does not arise as a result of conflicts but independently out of conviction.
Guess what, its not enough to call yourself antiauthoritarian, its hell of a work to kill the cop in your head.
Fight Back for Syrena!
The future is anarcha-queerfeminist!
Sincerly yours, some of many anarcha queerfeminist no ones.